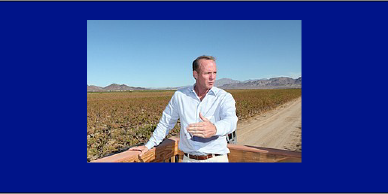 The L.A. land and water company, which has been trying for a quarter-century to win approval for a desert water storage and conveyance project, is optimistic that the incoming administration and the Republican-controlled Congress will remove the last major obstacle for the project’s $250 million first phase.

That barrier is an October 2015 decision by the federal Bureau of Land Management requiring extensive environmental review that could take years before Cadiz could place a water pipeline next to a railroad.

Without that pipeline, Cadiz has no way to transfer billions of gallons of water a year from its remote Mojave Desert aquifer to systems that send water to 400,000 households throughout much of Southern California.

Company executives believe that with his stated focus on infrastructure projects, Trump will appoint people to the Interior Department and the BLM who will be more receptive to the project.

“With a single rescission of a BLM determination, a Trump administration can send us down the road towards clean water for 400,000 (households) and a project that generates $1 billion in economic stimulus and 5,000 jobs,” said Cadiz Chief Executive Scott Slater.

Even if that fails, Slater said there’s still a good chance – much better than before the Nov. 8 election – that Congress will step in to help the project. A bill that would allow the Cadiz pipeline and similar third-party infrastructure projects along railroad rights-of-way is waiting for the next Congress; with Trump in the White House, its chances of getting signed into law are viewed as better than with the current administration of President Barack Obama.

Investors have reacted with glee to the seemingly improved odds for the project, sending Cadiz shares to a 52-week high of $10.40 a share in the weeks after the election; as of last week, the stock was still hovering near that peak.

The company also announced last week that it had closed a public offering of 1 million shares of common stock, resulting in net proceeds of $10.6 million, to be used for working capital, business development activities, and other project planning costs.

“While it’s not a slam-dunk that the BLM determination is reversed or restructured in a way that’s entirely favorable to Cadiz, there’s enough optimism to move the stock price,” said Larry Kosmont, an L.A. economic development consultant. Kosmont reviewed an earlier iteration of the project when he sat on the 38-member board of the Metropolitan Water District of Southern California, the region’s major water wholesaler.

Cadiz, based downtown, has been trying for nearly 25 years to develop a water storage and sales project for an aquifer under its 45,000-acre holdings in the Cadiz Valley east of the Twentynine Palms Marine Corps Air Ground Combat Center. An initial plan to store more than a million acre-feet of water in the aquifer was rejected in 2002 by the Metropolitan Water District.

The company came back in 2009 with a scaled-down plan and has signed agreements with six water agencies to pump up to 50,000 acre-feet of water a year out of the aquifer and send it via pipeline to the MWD-operated Colorado River Aqueduct. That plan received environmental approvals three years ago and survived numerous legal challenges from environmental groups, which said pumping out groundwater would impact the desert ecosystem. The last of those challenges was exhausted this year when the state Supreme Court denied an appeal.

Environmental groups saw a new chance to challenge the project, however, when the Bureau of Land Management blocked Cadiz from receiving a ministerial approval for its pipeline last year, thus requiring another complete environmental review.

If nothing else, the ruling meant several more years of waiting for a final approval from the bureau.

If the decision is overturned, then BLM approval is almost certain.

That would allow Cadiz to focus on the last remaining hurdle: negotiating terms for the right for Cadiz to transport its water through MWD’s Colorado River aqueduct.