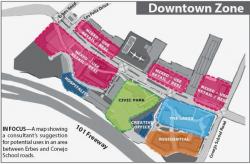 Courtesy of the City of Thousand Oaks

If a bustling mix of residential, dining and retail around the Civic Arts Plaza is to become a reality, the City Council must get aggressive with its real estate portfolio, leveraging public property to transform the area’s hodgepodge of oddly shaped parcels into a cohesive “village.”

That is the recommendation of a consultant hired by the council last year to figure out how to create a vibrant, pedestrian-friendly downtown in a city designed without one.

Larry Kosmont of Manhattan Beach-based Kosmont Companies shared the message with the aid of Community Development Director Mark Towne and Economic Development Director Haider Alawami during a Jan. 24 presentation in front of the City Council. Dubbed the “Downtown Revitalization Plan,” the proposal laid out a detailed redevelopment strategy for a half-mile stretch of Thousand Oaks Boulevard between Erbes and Conejo School roads.

“We are proceeding going from ground level up to 10,000 feet to think about the downtown area of Thousand Oaks,” Towne said at the outset of the presentation.

Kosmont’s village concept uses integrated design in architecture, landscaping and amenities to give the downtown area a sense of place, like Old Town Pasadena.

“What we’re really trying to do is create an exciting destination for residents and visitors,” Kosmont said.

But such integration won’t be possible if the city isn’t able to merge some of the area’s smaller parcels into larger ones. Otherwise there are too many owners to all get on the same page, he said.

Currently, there are 51 parcels in the downtown area that range in size from about 7,000 square feet to 1.35 acres. One way to eliminate the small parcels would be for the city to purchase them or encourage private mergers. The city already owns more than half the land in the corridor, including the land beneath The Lakes shopping center.

A slide provided by Kosmont (shown above) suggested what might be possible once the properties are consolidated: a series of mixed-use developments, including residential units behind The Lakes.

It also suggests the possibility of a boutique hotel as well as live work spaces, all centered around getting people to congregate in an interconnected space.

Last week’s presentation comes at a time of heightened interest in the downtown area, especially in regard to residential.

Work is nearly complete on two apartment complexes (81 units total), and a developer recently got approval to build 40 high-end apartments down the street from The Lakes. The council is expected to vote soon on two mixed-use proposals: the Daly project at the former site of Lupe’s, and Rick Principe’s plan for the former Conejo Valley Veterinary property.

With all this activity, Towne said, it’s imperative the council creates a vision for what it wants for the area before it’s too late.

He said interest in developing along the boulevard has picked up since the council voted last summer to allow an additional 200 residential units in the Boulevard Specific Plan area and ease some parking provisions for businesses.

At its next meeting, the council plans to create an ad hoc committee made up of two council members to study recommendations made by the staff and by Kosmont, who thus far has received $40,000 for his work. The committee would convene outside regular council meeting hours.

Working with interested parties, including the Thousand Oaks Boulevard Association, the committee will define specific goals for the area in question.

“We only have about 600 units plus to build in this city, and this will be our last opportunity to seize the moment to reinstate linkage fees so we will have something to help with senior housing and other housing in our town,” she said.